The main asteroid belt lies between Mars and Jupiter and any discoveries made using iTelescope equipment are likely to be located in this region. As we travel beyond Jupiter we find asteroids that can be divided into two main classes i.e. Centaurs.

There is no general agreement on the definition of a Centaur and the situation is further complicated by the fact that the classification of newly-discovered objects can change when further observations improve the accuracy of their orbit.

It is for this reason that I have avoided differentiating between Centaurs and TNOs and have adopted the all-encompassing term used by the Minor Planet Center i.e. Distant Objects.

The greater the distance an asteroid is from the Sun the longer it takes to complete an orbit and the slower it appears to move when observed from the Earth. This table shows how the apparent speed varies with distance from the Sun. 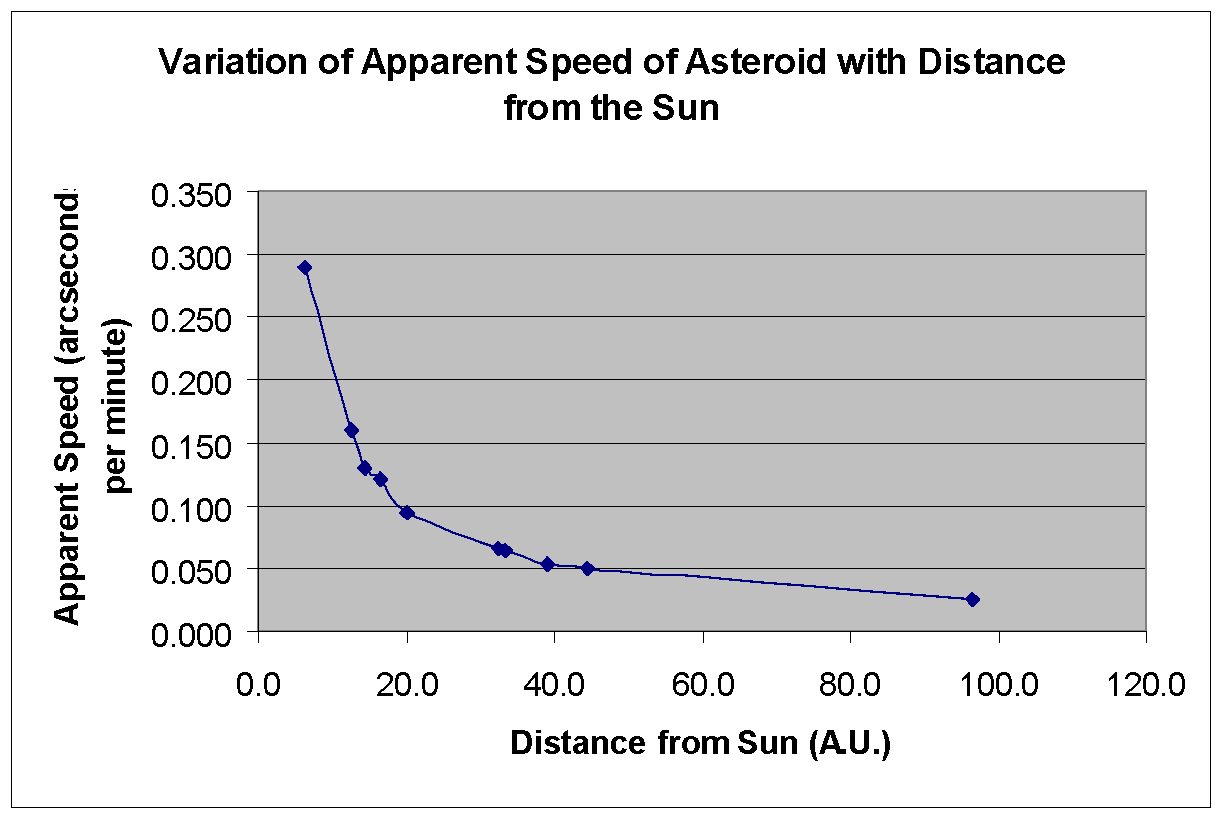 When these values are plotted out you can see how apparent speed varies with distance from the Sun. The practical consequence of this is that if we want to find objects further than (for example) 20 A.U. from the Sun we need to be able measure an apparent motion in the 0.1 to 0.02 arcseconds/minute range.

Can we Detect Slow Movers?

In order to see if this was possible, I imaged the Distant Object 55637 using T11 during the night of October 13th – 14th2012. At this time it was moving at 0.05 arcseconds per minute. The method used was as described in Part 7 except that instead of taking 15 images one after the other I collected three sets of five starting at 23 00 hrs on the 13th followed by 01 10 and 04 10 hrs on the 14th.  These times were a compromise between obtaining the longest possible observation arc while maintaining an altitude greater than 40°. When stacked for zero motion as 3 sets of 5 the observation arc was about 5 hours.

It should be noted that these observations pre-dated the 2015 iTelescope.net Fair and Acceptable Usage Policy. If I wanted to carry out a similar observation now, I would need to discuss the matter with iTelescope.net.

All the above shows that speed is not a problem when detecting Distant Objects.

Can we discover Distant Objects?

Currently my detection limit for discovering new objects, using T11 or T31, is about magnitude 21.5.  The following table gives details of Distant Objects which the MPC has given 2015 designations.

I have marked in red those magnitudes which are below my current limit of detection using T11 or T31 (21.5). With regard to the speed of the asteroids, they were all moving faster than my estimated minimum detection speed of 0.01 arcseconds/minute. In fact those moving faster than about 0.2 arcseconds/minute would be potentially detectable using the method described in Part 7 of these articles.

This table shows all the Distant Objects with 2015 designations listed by the MPC up to mid-July 2015. As you can see, 8 of the 11 were potentially detectable using iTelescope.net equipment. As has been discussed in previous articles not all your designations will turn out to be your discoveries. It should also be remembered that Distant Objects are very few and far between. During the same time period that the MPC listed these 11 objects they also recorded over 52,000 other asteroids.

In view of these results I intend to limit future Distant Object work to following up known objects and checking for others in the same field of view.

It not escaped my notice however that all of the 11 objects listed above were discovered by professional surveys using telescopes with apertures ranging from 0.9 to 3.5 metres. In contrast iTelescope.net users have the potential to obtain near-comparable results using their 0.5 metre scopes.  There are not many situations in science where amateurs can produce similar results to professionals and my thanks are due to the iTelescope.net organisation for enabling me to do just that.

This is the final article in this series - we hope you enjoyed it.  All credit for this series goes to Norman Falla - we appreciate his hard work!