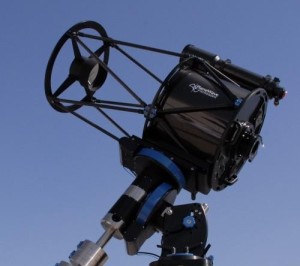 In my three previous articles I dealt with the rules for asteroid discovery, the work of the major asteroid surveys and the selection of telescopes and observing sites from those available at itelescope.net

What I aim to do now is describe in more detail different strategies for maximising our chances of making discoveries. As you will see, each strategy has its advantages and its limitations and I will try and give enough information to enable you to make informed decisions regarding which one to choose.

You will need to use planetarium software in order to follow the methods described.

I have only ever used SkyMap. It works very well for me and the User Group is a source of useful information.

Before I suggest targeting strategies it may be helpful if I draw your attention to those objects and regions that are best avoided.

One problem with imaging fainter than magnitude 21 is that you detect lots of stars. If you want to report the position of an asteroid you need at measure at least two and preferably three positions over a time period of 30 minutes or more. To do this you need the asteroid to be clear of stars for the entire period of observation and this may be difficult to achieve in regions of high star density.

If your planetarium software shows a major planet or stars brighter than magnitude seven in your planned field of view, it is better to shift slightly to a position which does not include them. If you are detecting down below magnitude 21, bright objects can obscure significant regions of the image and you risk missing potential discoveries.

The motion of planets and asteroids relative to that of the Earth means that close to opposition they appear to slow down and change direction. This table shows the effect as an asteroid approaches opposition.

At about 45 days before opposition the asteroid appears to slow down and to undergo a marked change in direction. Since we are trying to detect moving objects against a background of fixed stars we make things difficult for ourselves if we observe in a place where these objects are barely moving. As you will see later, the change in angle is also unhelpful because when we stack images we optimise for both speed and angle. Near the stationary point different asteroids can be moving in significantly different directions which make it impossible to pick one angle which is optimum for all.

There is another stationary point at about 45 days after opposition which in my experience can sometimes conflict with your follow-up observations when you are chasing down a potential discovery in order to increase the length of the observed arc.

The MPC Sky Coverage page enables you to monitor survey activity at the point where you plan to image and if necessary shift to a survey-clear region. One thing to remember about recently surveyed regions is that the emphasis is on “recently”. It normally only take a few days for observed asteroids to clear an individual field of view and to be replaced by a new, possibly unobserved, collection. What you can do is to check out the prevailing direction of motion of asteroids and chose your observation position and night accordingly.

If you set the MPC Minor Planet Checker to display a 60 arc minute radius field of view on the date at which the area was surveyed and then advance the date one day at a time you can estimate how long it takes for the original asteroids to be replaced by new ones.

The Road to Recovery

An asteroid can never be your discovery before it is numbered and in order to be numbered it needs position measurements made during about four oppositions. You have the option of making a potential discovery and then leaving it to the surveys to do the follow-up work. The disadvantage of this is that it can take decades and I personally try to recover all asteroids for which I might be the discoverer. In order to do this I need the orbit at the end of the current opposition to be sufficiently accurate for me to locate the asteroid during its next favourable opposition.

I use the term favourable opposition to draw attention to the fact that the apparent brightness of asteroids can vary significantly from opposition to opposition depending how far away from the Earth their orbit takes them. In Orwellian terms, all asteroid orbits are elliptical but some are more elliptical than others. If your potential discovery was not very bright when you first observed it and at that time it was at its closest point to the Earth, the chances are that at the next opposition it will be sufficiently far from the Earth to be undetectable. If this happens you have to wait until its orbit takes it back close enough to the Earth for you to be able to detect it.

In practice you need observations extending over at least 30 days to have a reasonable chance of finding an asteroid at its next opposition: 40 days are better and 60 days or more should make subsequent recovery fairly easy. A 60-day arc also gives you a good chance of recovery even if you have to wait for two oppositions before it is bright enough to observe.

Where Should We Target?

We now know what and where to avoid and we know that we need an observation arc of about 60 days. Putting all these facts together and assuming we will observe close to the ecliptic allows us to define the following target areas:-

Reason: More than 70 days and it gets increasingly difficult to observe early in the lunar month at a sufficiently high altitude in a dark sky. Less than 55 days and asteroids are getting close to their stationary points.

Advantages: You stand a good chance of being the first to observe an asteroid during its current opposition. If this turns out to be the discovery opposition then you will be the discoverer.

Disadvantages: The apparent brightness of asteroids is less in this region than it is closer to opposition. This means that you may fail to detect asteroids here that you would have found had you observed closer to the opposition point.

Reason: More than 35 days and asteroids are close to their stationary points Less than 20 days and you are in a region which is so heavily targeted by the major surveys that it is difficult to work around them.

Advantages: The apparent magnitude of asteroids is approaching the maximum value they will reach in the current opposition so your chances of detection are increased.

Disadvantages: Your chances of being the first to observe an asteroid in the current opposition is less than they would be if you observed further from the opposition point.

At the opposition point asteroids are at their brightest and they are in a region where the major surveys are all over them like a rash, I take the view that although there may be some that will escape detection I stand a better chance of discovery at one of the two positions listed above. It is for this reason that I do not attempt discovery to the West of the opposition point. Having said that, I do a lot of follow-up work in this region and I have found moving objects that are not immediately identifiable. I report them but do not follow them up. In the unlikely event of mine being the discovery observation I am happy to wait for the surveys to find them.

Another disadvantage of observing West of the opposition point is that an asteroid that is faint when you detect it close to opposition will become even fainter as it moves Westward. The problem is that it may become too faint to detect before you are able to obtain a 60-day observation arc.

How Far from the Ecliptic?

The closer you observe to the ecliptic the more asteroids you will see in you field of view and the greater your chances of discovering new ones. The major surveys are of course well aware of this and in this image you can see an example of how their observations trace out the path of the ecliptic across the night sky. 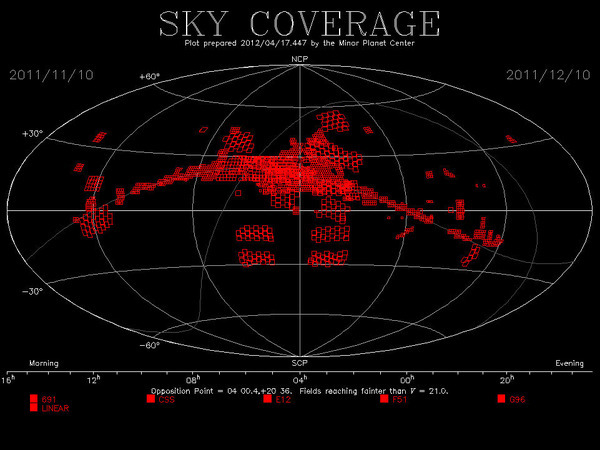 I have used the MPC Planet Checker to display all the asteroid in the field of view of the itelescope.net T11 scope at the opposition point at midnight on November 25 2011. The table shows how the number of asteroids varies as the distance from the ecliptic increases.

1. You are moving away from the heavily surveyed region close to the ecliptic which reduces the chances that anything you do find has been observed previously.

2. The further an asteroid is from the ecliptic the less it tends to brighten as it approaches opposition. From the point of view of the amateur discoverer this is a plus point because what we really want is to find are asteroids that are just within our limit of detection but do not get a lot brighter in this or in any other opposition

Targeting a Known Number of Days Before Opposition

1. Choose the month in which you want to observe. For demonstration purposes I have chosen November 2011 at Mayhill.

2. Set your planetarium software to display the midnight sky on day of the New Moon. This was November 25th. Make sure that you are not set to Daylight Saving.

4. Centre the display on the opposition point. In SkyMap this corresponds to the Earth’s shadow.

5. Display all the numbered asteroid and choose one that is closest to the opposition point. This will be your locator asteroid. I chose 38498.

7. Adjust the clock time until the locator asteroid lies just to the East of the meridian. This gives us a time of 05 00 hours which will be the end time if the observation period.

8. Go back one day at a time until you find the earliest day on which the sky is still dark. This takes us to November 24th.

9. Set the clock back 100 minutes. This gives us a time of 03 20 hours which will be the start time of the observation period.

I cannot claim this method will work for all possible combinations of days before opposition, date and location. You may find circumstances where it is impossible to observe in darkness over the required period at a reasonable altitude. If this happens one thing you can try is switch between Northern and Southern hemisphere observatories and check if that improves the situation.

One additional tip: when observing East of the meridian: do not plan for the observation period to end too close to the meridian. If your observation starts later than planned due to technical problems you may cross the meridian and cause the scope to execute a meridian flip. The itelescope.net scopes that I have flipped coped well although you may lose a single image during the flip. Although the pre and post flip images I obtained had the same orientation I found the difference in the vignetting pattern to be a disadvantage when optimising the image contrast to reveal faint objects.

We now know about the asteroid discovery rules, how to work in competition with the surveys and how to select and target the telescopes. The next stage is to get down to some serious asteroid imaging but before then it is best that we take a look and some of the artefacts that can appear in our images and which we may confuse with real moving objects. This will be the subject of my next article.