The Surveys - Part 2 of Discovering Asteroids at iTelescope.Net Print

In my previous article I gave some details of the rules used by the Minor Planet Center (MPC) when crediting individuals and observatories with the discovery of asteroids.

I gave as an example one of my discoveries (316010 2009 FC5) and mentioned the observations made by myself and the various observatories that carry out asteroid surveys.

The asteroid was observed for five oppositions before being numbered and during this time, I observed it on 16 nights while a total of nine additional nights were clocked up by four different surveys.

Clearly in the case of this particular asteroid, the surveys made a significant contribution to establishing the orbit and were it not for my initial observation, one of them would have eventually been the discoverer.

From the viewpoint of the amateurs, the surveys are both potential competitors in terms of discovery and potential collaborators in providing the additional observations the amateurs need in order to get their discoveries numbered.

One of the many services provided by MPC is their Sky Coverage Plot page which you can find here:-

This enables you to see which regions of the sky have been surveyed during a given time period. I am grateful to the Minor Planet Center for permission to reproduce the following images. 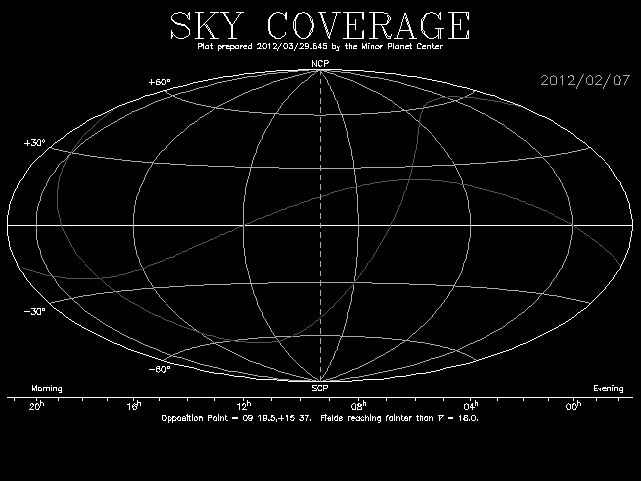 This image above shows the entire sky displayed within an elliptical frame. The horizontal lines represent Declination from + 90° to -90° while the vertical curves show 24 hours of Right Ascension. The central vertical dotted line shows the opposition and the sinusoidal curve between ± 30° Declination is the ecliptic.

The display is dated 7th February 2012 which was a full moon hence the lack of any survey activity.

If we now display the period between the 7th February and 8th March 2012 we can see the survey activity over a lunar month. 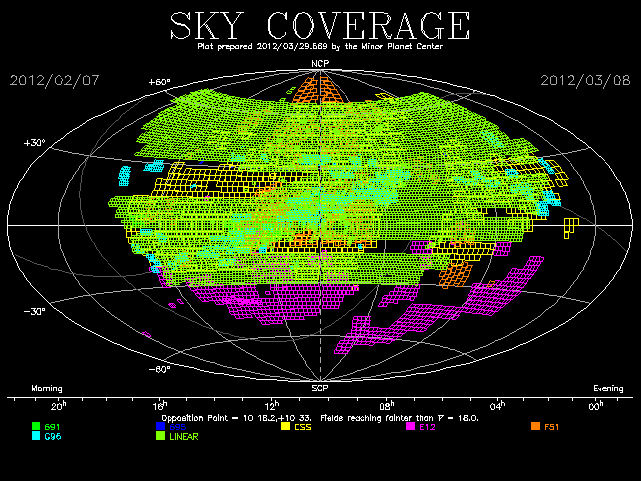 The coverage of seven of the surveys is shown above in the form of numerous colour-coded rectangles each of which represents the field of view of the telescope involved.

At first sight the extensive coverage appears rather dispiriting from the amateur viewpoint but fortunately the type and location of the itelescope.net equipment enables us to gain an advantage or, as you will see below, several advantages. 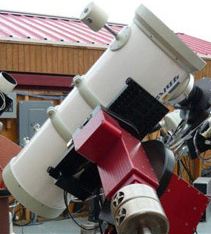 In the previous article we saw that using telescope T4 we could detect objects down to a magnitude of 20.5. All things being equal, the larger the diameter of the objective lens or mirror in a telescope the fainter the objects it can detect. T4 is a 10 inch scope which raises the interesting question of how faint you can go when using a 20 inch scope like T11. 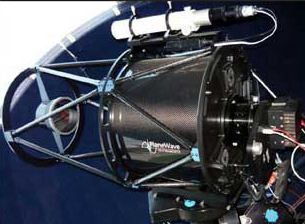 I know from my own work that I can detect down to magnitude 21.5 on a routine basis using T11.

Each of the surveys has a limit of detection in terms of magnitude and when we take this into consideration the situation changes. The extensive coverage shown is for surveys that can detect objects fainter than magnitude 18.0, which in practice include all of them. 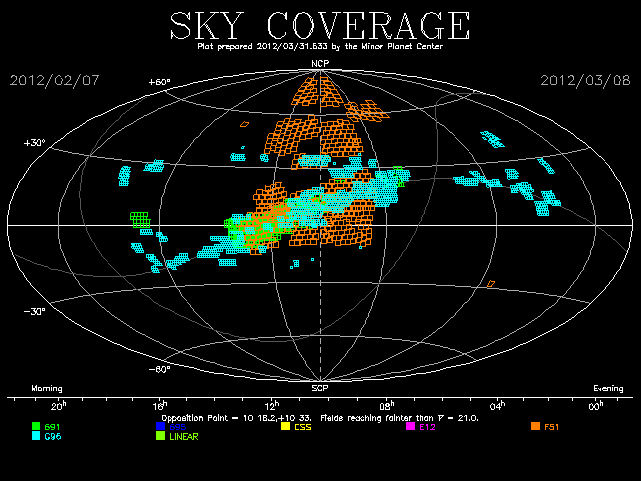 This plot above shows the surveys that can detect down to a magnitude of 21.5 and are therefore in competition with T11. As you can see there are now significant regions of sky that are un-surveyed down to this magnitude.

The 21.5 magnitude plot is for the period 7th February to 8th March 2012 and shows the un-surveyed regions available to us assuming we are sporting enough to wait until the end of this period before trying to beat the surveys.

If however we only wait seven days for the moon to clear the midnight sky you can see that even more un-surveyed regions are revealed in this plot for 7th – 14th February. 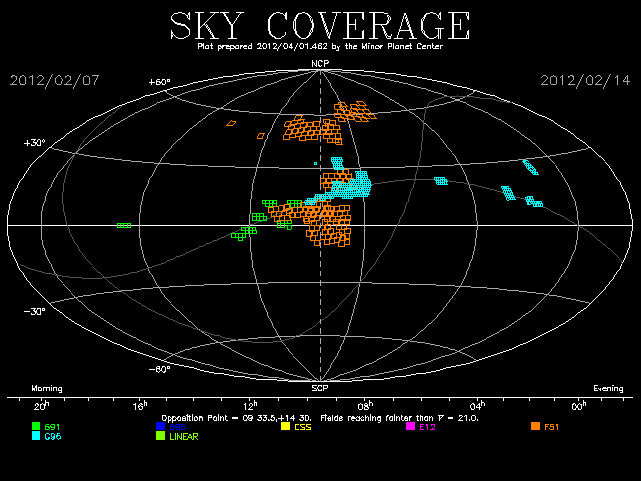 The itelescopes.net observatories at Nerpio and Mayhill lie on similar latitudes (38 09° and 32 54° N respectively) and consequently if a target area is in a favourable viewing position at one of the observatories it will be equally well positioned at the other.

In April 2012, the only professional surveys that routinely reached magnitude 21.5 were two in the South-West United States and one in Hawaii. If the weather conditions are such that the domes are closed at Mayhill, then there is the chance that observations are possible at the itelescope.net Spanish site at Nerpio. If the weather is such that it takes out some or all of the US surveys then our chance of making discoveries from Spain is increased.

Currently there is no 20 inch scope at Nerpio but there are two 17 inch instruments. 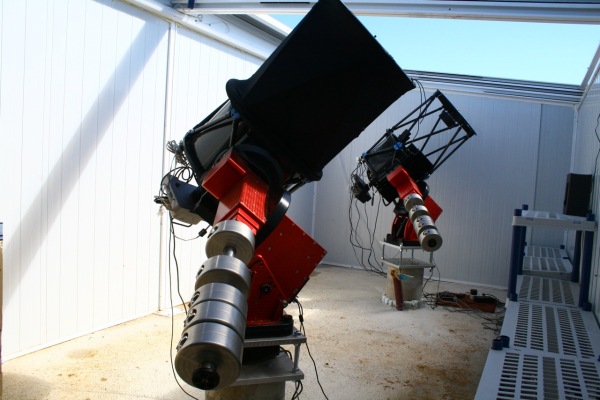 I don’t have a lot of experience of imaging from Nerpio but I have used T17 on a couple of nights under less than ideal conditions and reached down to magnitude 21.

As you may know Dr Christian Sasse has used T17 to set a new world record for the most distant object ever observed using an amateur-sized telescope.

The aim here is to image as close to the Eastern Horizon as possible while it is still dark.

In the previous article we noted that in order to be credited with an asteroid discovery you need to be the first person to observe it in the discovery opposition. At the beginning of an opposition an asteroid moves from the daylight sky through the morning twilight and into the night sky. We aim to position ourselves ready to pounce when it first enters the night sky thereby giving ourselves the best chance of being the first to observe it in what hopefully will be its discovery opposition.

I plan to give to give details of how to do this in a later article but suffice it to say that at certain times of the year you can image asteroids up to 70 days before they reach opposition.

One limitation of the method is that you lose the magnitude advantage. As an asteroid approaches the opposition point it becomes more directly illuminated by the Sun and consequently it becomes brighter and easier to detect.

One way around this problem is to observe at a point 70 days before opposition but more than 10° North or South of the ecliptic. The further it is from the ecliptic the less directly an asteroid is illuminated by the Sun and the smaller is the opposition brightening effect.

To take an extreme example an asteroid 30° from the ecliptic may only brighten by about 0.5 magnitudes.

Observing far for the ecliptic does lessen your chances of finding asteroids but those that you do find are less likely to have been observed previously.

There are indeed a couple of advantages in using the itelescope.net observatory in Australia and the first of these concerns imaging asteroids when they are high in the sky. 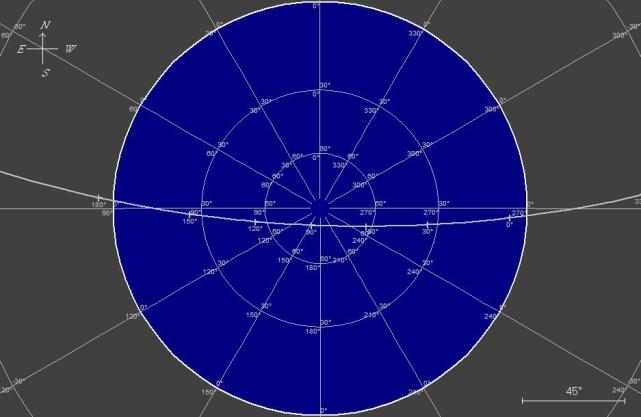 This image above shows the midnight sky in January at Mayhill. The outer white circle is the horizon while the two lighter concentric circles represent 30° and 60° altitude .The curved white line roughly bisecting the horizon circle is the ecliptic.

I try to image at as high an altitude as possible (ideally above 60°) as this increases my chances of detecting faint asteroids. The lower the altitude the longer the optical path through the atmosphere and the greater the image degradation caused by air pollution and turbulence. As you can see at Mayhill in January the ecliptic (along which asteroids tend to be concentrated) has almost the maximum region possible above 60° altitude.

January is the ideal month for observing from Mayhill but you can do useful work between October and March. 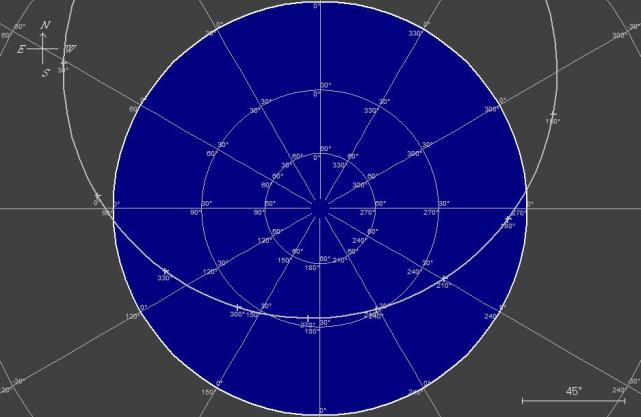 However if we move forward six months to July you can see that the situation is quite different. The ecliptic is much lower in the sky and is barely above 30° altitude at its highest.

An altitude of 30° is not a place you want to be if you are imaging faint objects but at Mayhill in July that may not be your only problem since it about this time that the North American monsoon season begins. The monsoon season, which last into September brings with it bursts of heavy rainfall and strong gusty winds. 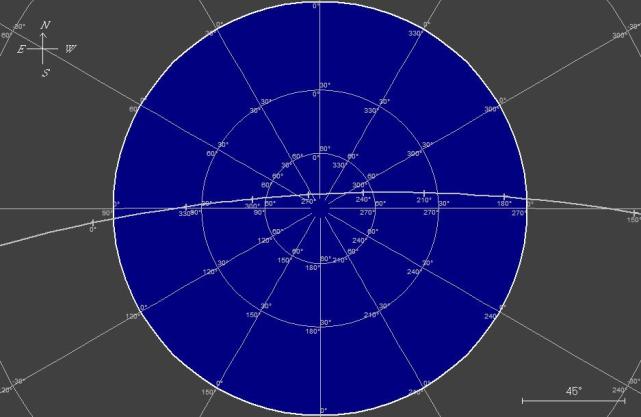 Fortunately for itelescope.net users, Australia is but a mouse click away and as you can see the position of the ecliptic in July is similar to that at Mayhill in January. We can easily image at or near the ecliptic from Siding Spring at altitudes above 60°.

In practice you can do useful work from Siding Spring between April and September. 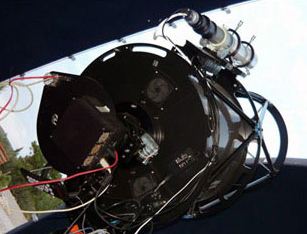 Another Australian advantage is T30, a 20 inch telescope identical to T11 at Mayhill. I am looking forward to getting the same high performance from T30 as I do from T11.

In the first two articles we have covered the rules concerning asteroid discovery and seen how to use the resources of itelescope.net to compete with the professional surveys. What I plan to do in the next article is to describe the advantages and limitations of the various telescope-camera combinations currently available at itelescope.net both for initial discovery and for follow-up work.